Now that the new PBS show Mercy Street has aired, I can finally share that I had a hand in creating the opening title sequence (see my blog post from last year). While the show provided the character and location video used in the titles, all the other overlay elements had to be generated, which is where I came in.

Rather than create everything in the computer, we instead shot as much as we could practically. That is one of the calling cards of production company Elastic, who has also provided opening credits for other shows such as Game of Thrones, True Detective (winning the 2014 Emmy for Outstanding Main Title Design), and Marvel's Daredevil.

I'm still working on pre-production for the short film I'm shooting at the end of the month. We're getting the equipment orders put in and finalizing details. Tomorrow we have a read-through of the script with all the keys and will be making sure we have everything ironed out for the shoot. Everything seems to be coming together nicely and I'm excited to get this made.

Last night we had a cast, crew, and friends/family screening for Mystic Cosmic Patrol, which is a television pilot that I shot last year. We screened two of the three episodes and got a great response. Not only did we have an awesome cast (Chris Masterson, Timothy Jo, Laura Monaco, Chris Candy, Chelsea Tavares, and Tim Russ), but a great crew and production team. It was nice to see a lot of them again and I was very pleased with how the final product turned out. I tend to be a pretty harsh critic of my work, but even I liked it. Hopefully, we can find a studio that enjoys it as much as the audience at the screening did. This was my favorite project to shoot and ended up being my favorite completed project as well, so I'd love for it to get a series order.

This past week I was shooting the miniatures and titles unit for Gods & Secrets down at the YouTube Space LA. I've shot some miniatures before for a variety of projects, but these were the largest miniature sets that I've worked with so far. We used Cine Magic International's Revolution snorkel lens system, provided by Clairmont Camera. YouTube provided a RED Epic Dragon and our dolly was from Chapman.

Gods & Secrets is a dark superhero series directed by Adi Shankar and Stewart Yost, though the miniatures and titles were directed primarily by Yost. It's set to be released later this year.

The last couple days were spent traveling and location scouting the north Lake Tahoe area for a short film that I'm shooting at the end of the month. It was cold and snowy, but that will work great with the story that we'll be telling. We found some great places to shoot (besides scouting the already locked locations), so it's looking good.

Last August I posted about a Nike shoot I worked on. I had heard that it was playing in stores a couple months back and finally had some time to make it down to the local Nike store to check it out. Oddly enough, I couldn't find it playing on any of their tall aspect ratio store screens (which all seemed to be displaying shopping portals, not video), but a cropped version was playing on the giant wall of screens right behind the checkout.

It was pretty cool to see some of the stuff I shot on that big of a screen. I just wish I could have seen it the way it was originally intended to be displayed. I know it was shown in the full tall aspect ratio at another store, as the main unit DP showed me a picture, so perhaps I need to drop by a different location. Either way, it's still cool to see my work playing at Nike. 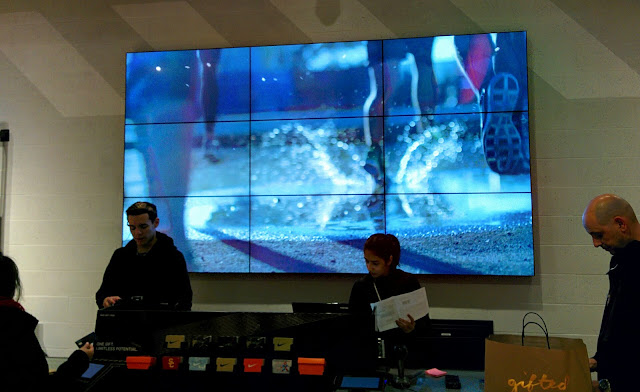