Now that the series has aired, I can share another single pickup day I worked on, this time for the Peacock series Rutherford Falls. These are some simple driving shots of a BMW driving down a desert road, with some passes, jib ups, and other various shots. We were in a Mercedes arm car with a "The Edge 3" arm and head, shooting on a RED Gemini, as part of it would be occurring near dusk and into the night, so light levels would be low by the end.

I was camera operating the head via joystick and, while I've operated remote heads before, this was my first time operating in an arm car. It's really not that different from operating on any other shoot with moving elements or other car to car shots, which I do fairly frequently, so I wasn't worried at all. I was very happy with what we shot and the director seemed pleased. 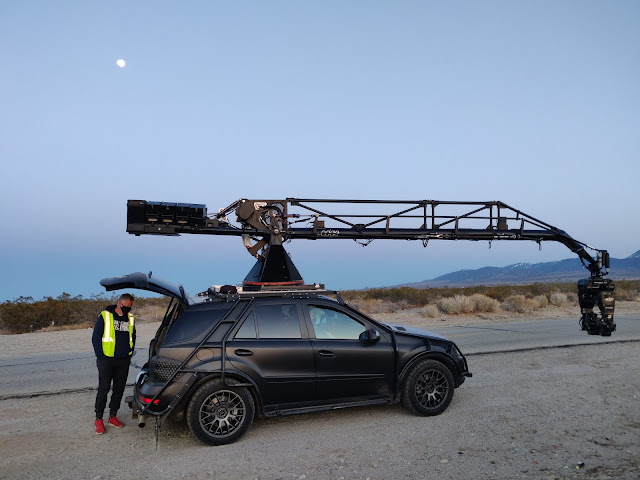 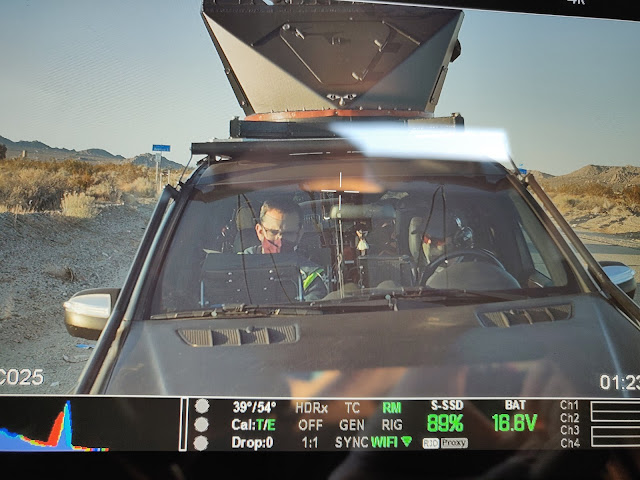 All our shots are in the final episode (episode 10) of season 1. We did a night shot that is used in the middle of the episode (around the 12m15s mark) with the camera floating from the highway shoulder onto the road as the main character's car drives by. My focus puller did a great job as it was totally dark and there weren't really any visible marks he could pull to, so he was flying by the seat of his pants and nailed it. 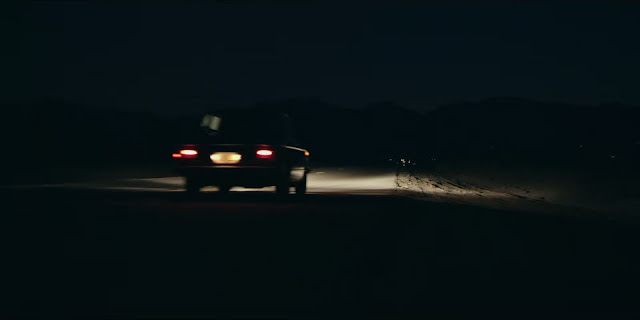 We also shot what is essentially the closing shot of the season (they cut to the credits after our shot, then briefly cut back for an inter-credits "we have one more thing" moment). It's kind of cool that we were entrusted to capture the "closing shot" that is a nice visual send away to the characters for the season as the car zips by on a lonely highway while the camera jibs up with the car receding away towards the mountains. 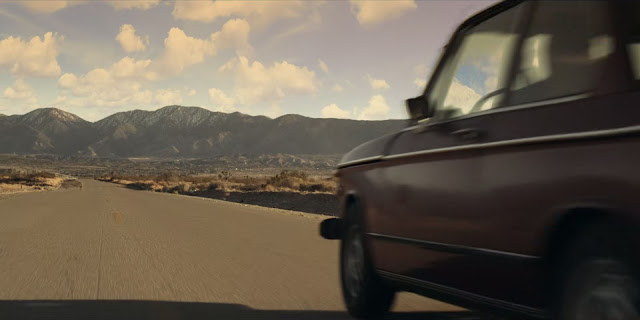 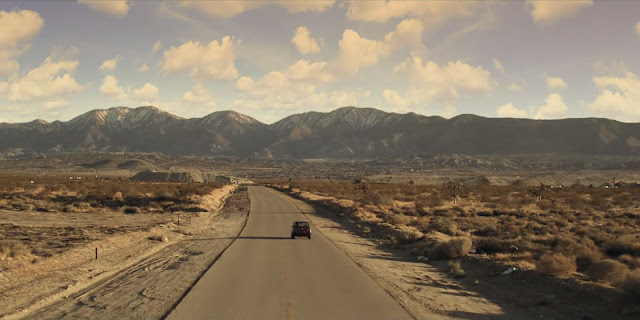 Earlier this year I did some second unit photography for season 3 of Miracle Workers: Oregon Trail. These were VFX plates of river crossing locations, where the VFX team would take the high resolution pan and tile plates and populate these environments with CG characters.

The tool of choice was the usual RED Gemini. I shot each set of tiled plates with a couple different lenses: the Zeiss Super Speed 25mm and the Sigma Art Cine 14mm. In situations with little direct supervision, it's always safer to shoot two options in case one of them doesn't work for the VFX team. Adding that second option, even if it wasn't asked for, on a shoot like this is just a smart move since we had plenty of media and drive space and the plates weren't that data intensive anyway. They don't want to add another day of shooting pickups and I would prefer not to make the 6-hour drive to this location again. In the end, it is a bit time consuming since I'm shooting tiles (about 8-14 tiles for each shot), but I knew my schedule and knew I had the time to give them that secondary coverage and still make my day.

There was also a drone team shooting with us, but the wind was pretty strong and so our unit had to split up, with myself going off and shooting the plates all on my own while the field producer stayed with the drone crew, supervising their work. Fortunately, I had gone over the locations with the field producer beforehand, so I knew what to get and where.

One of the locations had a barrel full of firewood burning just off screen with tons of smoke pouring out, and there were no other places where the land jutted out into the water far enough to get the shot, so it had to the that place. Knowing I couldn't stop the smoke, I quickly moved on, hoping the fire would die down before I returned later in the day. When I came back to shoot the location near the end of the day, it turned out delaying was a positive, as the barrel was no longer smoking, but on top of that the tide had gone down and I was able to get out even further to place my camera, which ended up with a better shot.

After wrapping things up, I headed back and met up with the field producer and drone team as they were finishing up their day, and just in time too. The sun would soon be too low to get the shots we needed. Mission accomplished. 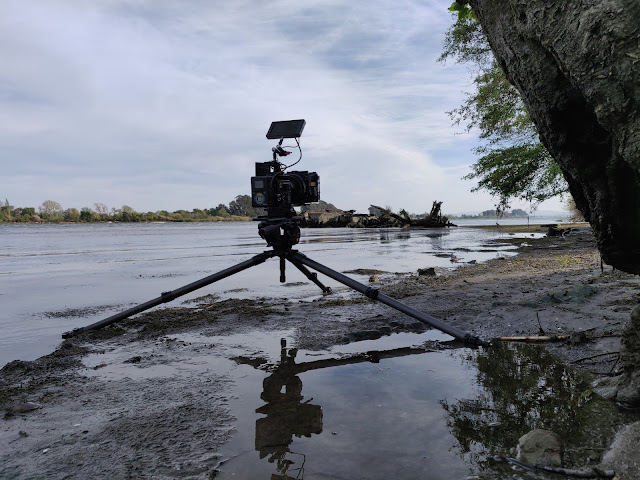 Getting the tripod a little wet is a small price to pay for a better shot. 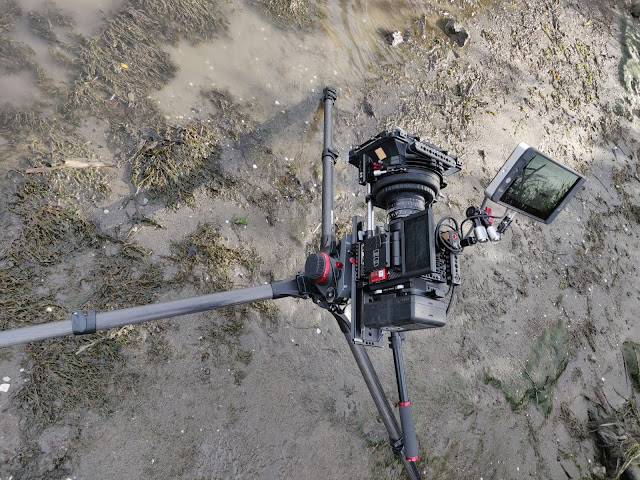 I found the other episode we shot driving plates for. This was a nighttime shoot, so we used a different LUT and mounted the cameras at a normal height rather than the elevated height for the double decker bus shots. 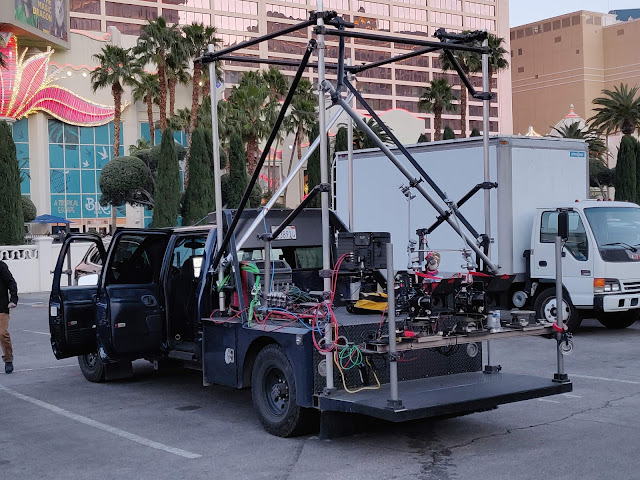 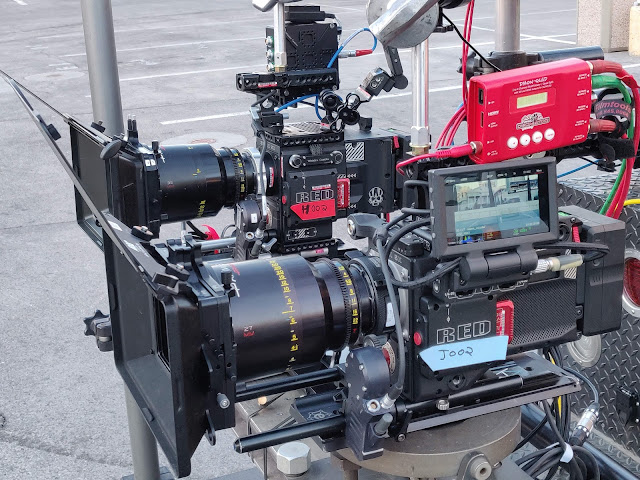 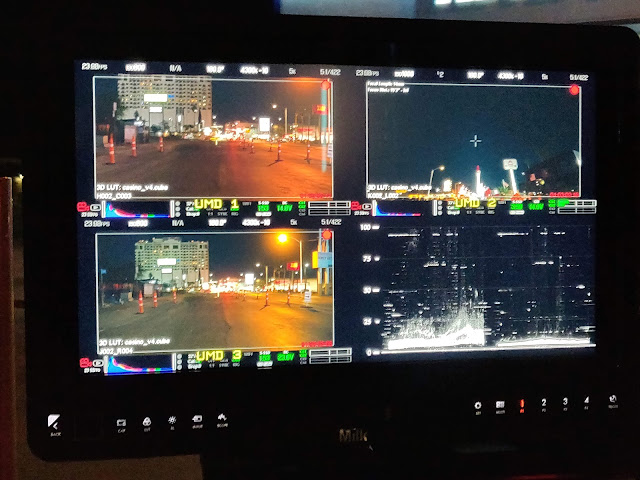