The Glamorous World of Driving Plates!

The past couple years I developed my skills shooting driving plates. While I had done them before, I started doing a lot of shoots for several of Chuck Lorre's Warner Bros. television shows (Bob Hearts Abishola, Young Sheldon, Mom) along with occasional episodes of other television shows. If you aren't familiar with what driving plates are, here's the lowdown. 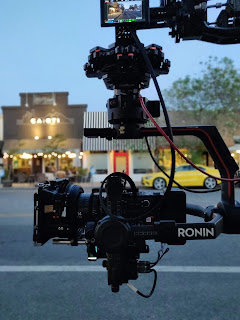 Often, on television shows that have driving scenes, those scenes are shot in a car on a greenscreen stage. This keeps the actors safe and also allows for a controlled environment, since the car isn't actually moving on the road. But since they need to look like they're driving, background plates of the moving street needs to be composited in behind them. So what happens is we get the edit of the driving scenes and we match the camera height, angle, and replicate any driving "movement" (such as swerves, pulling up to a curb, etc) so that the background can be properly matched to what they shot on the greenscreen. This takes us from city streets and freeways to suburban neighborhoods, parking garages, and even the drive thru. Whatever the story calls for, we shoot.

For most of our shoots, we use Jack Carpenter of Carpenter Camera Cars and rig up a RED Gemini on a DJI Ronin 2 with a FlowCine Black Arm. The Ronin keeps the camera stable and level while the Black Arm absorbs the larger side to side and up and down movement. The RED Gemini, with its dual gain sensor, allows us to shoot night driving plates on darker streets while keeping the sensor noise under control.

There are many options for lens choices, as each production calls for different parameters. The majority of my shoots want to shoot wide plates that they can then zoom in on and shift around the frame, giving them a lot of placement flexibility in post. For this, we generally use the Sigma Cine 14mm T2. We run a matte box at all times, during the day to be able to add ND filtration and block out sun flares, and at night just to reduce flares from street lights (so no ND). When we're not doing Gemini on the Ronin, we tend to also shoot Arri Alexa hard mounted to the truck, oftentimes with 2-3 cameras simultaneously. Again, depends on what the client asks for.

So maybe the world of driving plates isn't that glamorous after all, but it's an interesting part of the filmmaking process, one that most people don't even think about. I'm glad I've been able to develop this skill and enjoy the process and the wind blowing through my hair as we drive down the road (well, maybe I enjoy it a little less during the winter night shoots...😉). But the team we've put together to shoot these is all great and I love working with them. 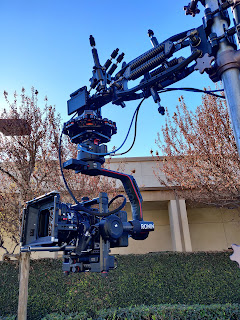