Earlier this year I went up to Las Vegas to shoot some driving plates for a show called Hacks. I had no idea what it was, but knew we had to rig the camera array 13' up in the air to match the second story of a double decker bus. We used a triple RED Gemini array, controlled through a router so we could roll and cut all 3 cameras at exactly the same time. 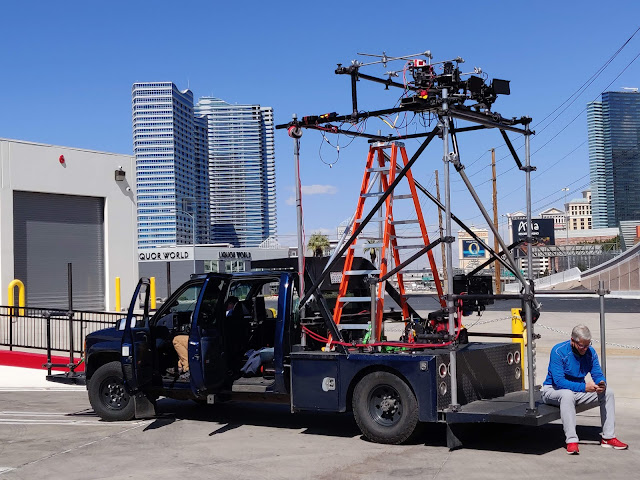 We did runs on both the Panavision lenses they shot the series on -to exactly match the optical characteristics- as well as 14mm Sigma Art Cine primes to give them larger field of view options. Better to give them both options and not need one than shoot one option and need the other that wasn't shot.

I was pretty surprised when a couple months later I saw ads for a new HBO Max show called Hacks. And dang it, it looked pretty funny. So these plates worked in episode 3 and, while I know they shot some of it practical, obviously plates were needed for other parts. Watching the show, since I knew plates were being used in the scene, I kept a close eye on stray hair strands, as that's usually the biggest way to notice VFX backgrounds. Whatever they did, they did nice work. There were a few instances where I think I can tell it's VFX backgrounds, but overall they did a really good job compositing everything together.

We shot plates for another scene as well, but I haven't seen them appear in the show yet. I'll keep an eye out for them and share once they're up. In the meantime, if you haven't see the series, I recommend it.